Tech writing pays my bills, but creative writing feeds my soul. I've been a writer as long as I can remember. It's one of my passions in life. Lucky for me, it's also my job! I love dogs, photography, ice cream and being a mom. 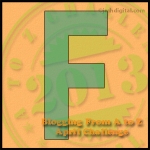 Fear is not my friend. Somewhere along the line that enemy of an emotion, I’m sure serves some purpose. But, I for one do not seek it out on purpose and I can’t understand why anyone would want to. I will be the last person you’ll find watching a scary movie. I’m the girl who thought Charley and the Chocolate Factory and The Wizard of Oz were scary. I can count on my hand the number of actual “scary” movies I’ve seen in my life – none by actual choice.

I saw  Halloween (you may have heard of it) in grade school at a girlfriend’s slumber party. I was afraid to be the only one that was too big of a “baby” not to watch. Unfortunately for me my vivid imagination replayed scenes from the movie preventing me from restful sleep for months (just ask my mother!) Poltergeist and Nightmare on Elm Street were two more peer-pressured movies I witnessed. Both led to more sleepless nights, where I humbly admit I pressured my younger sister into sleeping with me. What I thought she would do if we were actually attacked by Michael Myers or Freddie Krueger or that crazy clown under the bed, I don’t know. But I felt better having her there.

I hate that stomach-churning, sweat-beading feeling I get when I face something I don’t want to do. When it comes to fight or flight, my brain tells me to run as fast as I can and not look back. Yet deep down I know there is a time to fight and push that fear way forever. I find that courage more and more as I gradually venture outside my comfort zone. To pursue my dreams and not be afraid to be the woman I’m meant to be. To open my eyes going down the biggest hill on the roller coaster and see the track before me. To eat in a hotel restaurant alone instead of ordering room service. That’s they only way I’m going to be able to look at the fear reflected in my daughters’ eyes when they can’t sleep at night or are fearful that something they touched might make them sick. I want to tell them everything is going to be OK, and mean it. I want them to know it’s OK to fail and it’s OK to be afraid, but its not OK to let either stop them from their dreams.

What are you afraid of? Would you go to a scary movie on purpose?

What do you think? Cancel reply